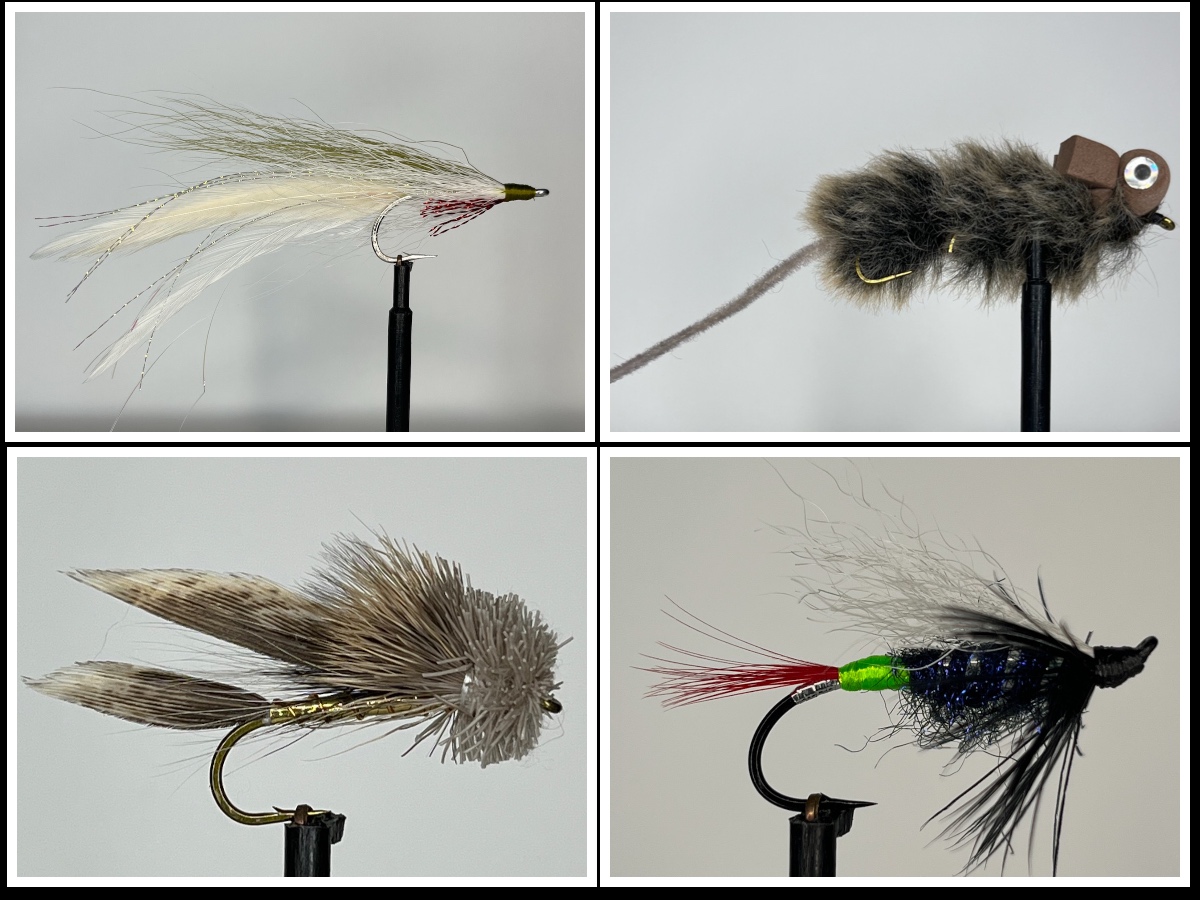 From my last several posts you might conclude that I’ve been working on tying some different fly patterns for fly tying contests. If you did, you’d be right. And by ‘different’, I mean fly patterns that I’ve never tied before. Tying new flies is very rewarding but … time-consuming. What I have done is taken the time and ventured into a category of flies I don’t fish very often called Streamers. If you don’t know what a streamer is then here’s a nice definition I found on the web:

Streamers are big flies used to imitate small bait fish and other moving aquatic invertebrates and creatures. The majority of the time these active flies will be given additional movement by different retrieves; also known as strips.

Going clockwise from the upper left, here are the streamers I have learned how to tie and will be submitting to a few fly tying contests that are coming up:

For the complete details of how these flies are tied, please scroll through the following stack of Fly Tying Cards or optionally download the PDF.

If you’re interested in tying some of these ”different” flies, hopefully these Fly Tying Cards will save you some time so you can get right to it. 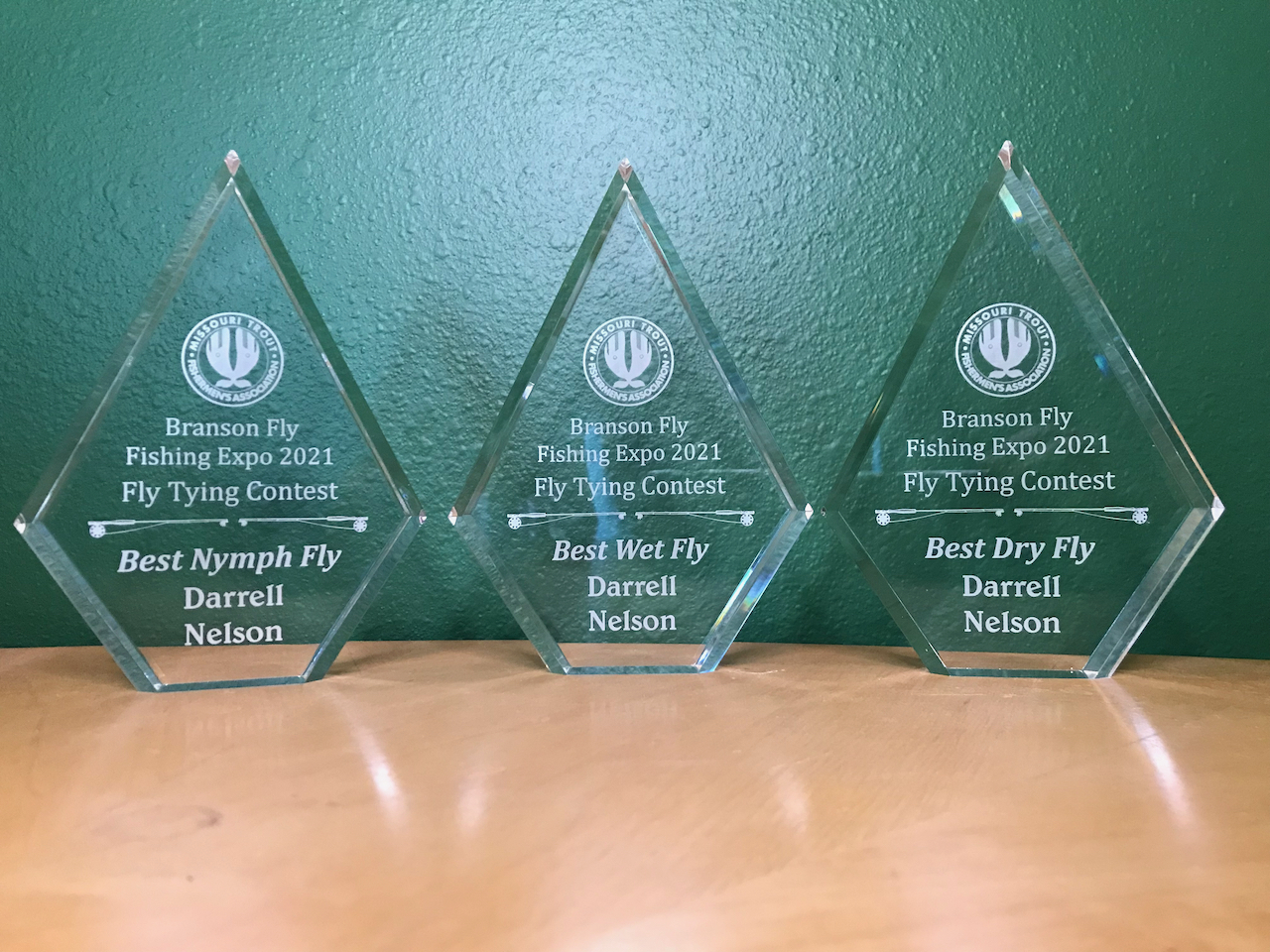 I spent the Thursday afternoon session tying Catskills-style dry flies and managed to demonstrate how to tie 6 of the 8 flies in one of my 5×7 Framed Flies. I must say that even I was impressed with how my divided wings, made from a wood duck flank feather, turned out on all 6 flies. After the session, all the fly tyers and vendors were invited to Branson’s History of Fishing Museum for a meet-and-greet event. If you ever want to see a frog harness or a minnow tube lure that’s definitely the place to go.

On Friday, I attempted to tie all 18 trout flies for an 8×10 Framed Flies display. That should be doable for me over an 8-hour span but no such luck. I managed to tie only 6 flies while spending most of the day gabbing with all the visitors. It was still a very interesting day though. What was interesting for me was that a beautifully-framed collection of last year’s three award-winning flies (one of which being mine) was auctioned off and it raised $75! Another cool thing was that this year’s seven award-winning flies (three of which being mine) will be put on display at that same History of Fly Fishing Museum for a year(!) and then will be auctioned off at the 2022 Expo.

On Saturday, I put all my frames and other projects aside and tied my award-winning flies exclusively. I hadn’t thought about it ahead of time but each of the three have a unique style or technique that aren’t very commonly used by most fly tyers. Here are those unique features: 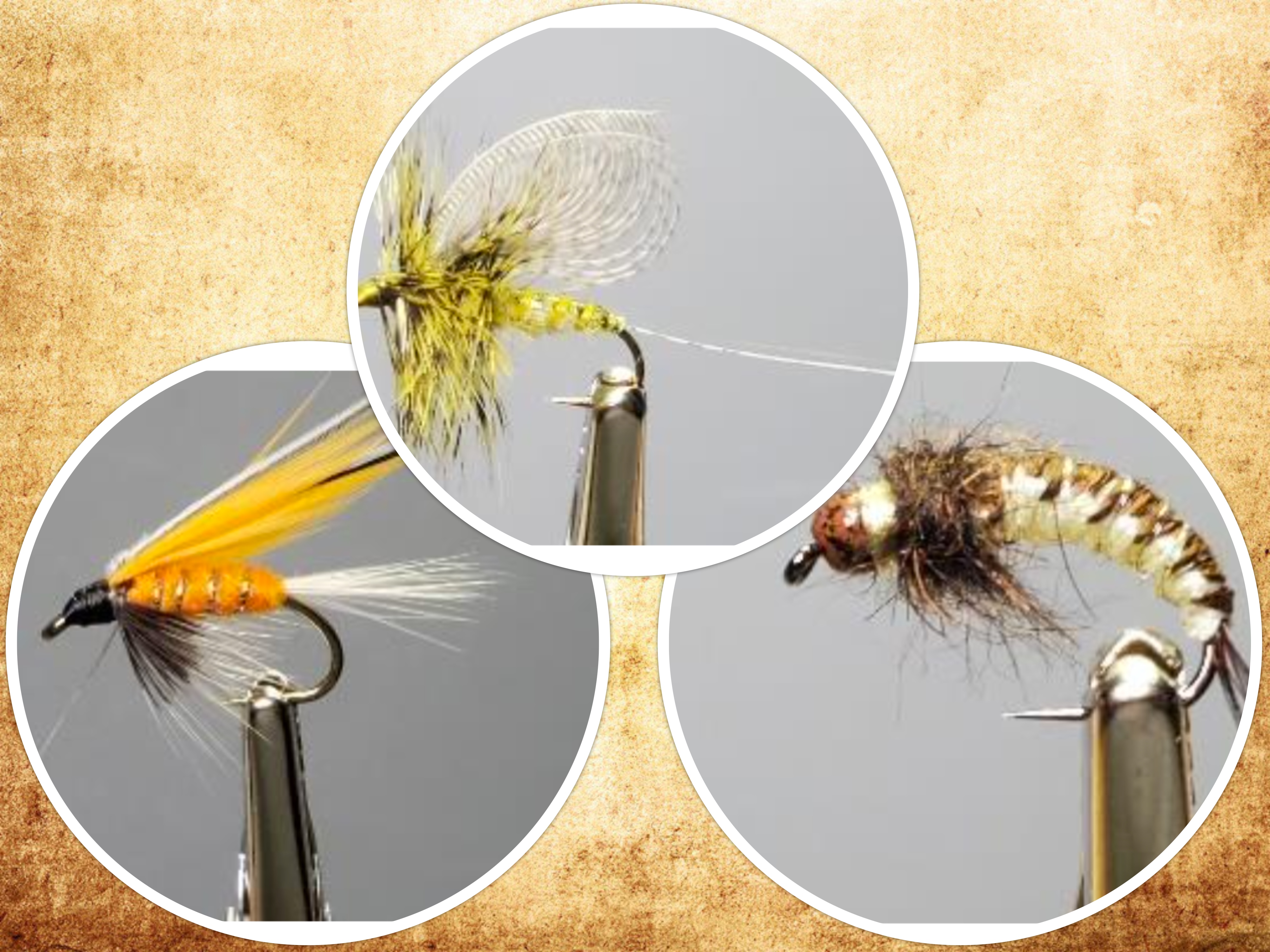 A few weeks ago I submitted 5 pairs of my tied flies to the 2021 Missouri Trout Fisherman’s Association’s Fly Tying Contest. The results have now been published and, lo and behold, I won 3 divisions – Nymph, Dry Fly, and Wet Fly! My winning entries were a Woven Polish Nymph, a Western Green Drake, and a Fontinalis Fin.

Follow this link to see all the winning entries of the 2021 MTFA Fly Tying Contest.

I’ll be receiving my trophies at the Branson Fly Fishing Expo at the end of July. If you should happen to be in Branson at that time, stop by my booth and say “HELLO”!

Follow this link for more information on the 2021 Branson Fly Fishing Expo.